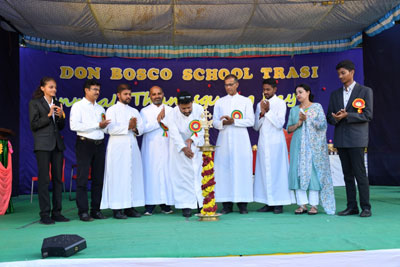 Under the theme, “Love Conquers All”, in keeping with the annual theme of the year, “Do all through Love”, Don Bosco School, Trasi celebrated its 11th Annual Thanksgiving Day on 26th November in grand style. Rev. Fr. Leo Pereira sdb, who was the Chief Guest for the function remembered his days at Don Bosco with nostalgia saying, “Family is a crazy bunch of people who care for one another. Don Bosco School is a big family and we are all connected to it”. Quoting the words of a song of ‘The Lion King’ which was to be staged later during the program, he reminded the audience that “we are all part of the circle of life and each one has their own role to play. Through despair, hope, faith and love we have to carry on till all of us find our place in that circle of life.”

Rev. Fr. Merwin Fernandes sdb, was the Guest of Honour on the occasion. Focusing himself on the theme of the annual thanksgiving day, he spoke about the 3 types of love in Greek mythology namely, eros, philia and agape with agape being the real type of love in which we love the others without expecting anything in return. When we do this we realize that ‘love conquers everything’.

During the course of the program, the students who had excelled in scholastic and co scholastic areas as well as those who had excelled in various fields at national and international level were felicitated. Donors who supported the school projects were also felicitated. After the formal program, cultural programs from various classes were presented by the students. The main attraction of the day, ‘The Lion King’ a musical from the movie by Walt Disney was presented by a cast of 140 students directed by Fr. Maxim D’Souza. The musical brought out the theme, ‘Love conquers All’ home to everyone with its well enacted scenes, coupled with well choreographed dances. The campus was decorated with the theme of the Lion King with the paintings of the characters from the Lion King at the grand entrance.