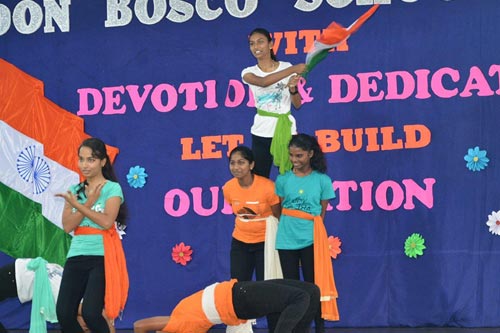 The 73rd Independence day of our country was celebrated with great enthusiasm and patriotic spirit here at Don Bosco School, Trasi.

Mr. Wilfred Stany D’silva, a retired Air Force Officer was invited as the Chief Guest of the program. The chief guest hoisted the tricolor followed by the children delivering patriotic speeches and sang patriotic songs.

In his speech, Mr. Wilfred asked the children to grow in the true spirit of patriotism and encouraged them to join the armed forces.

Later, we had the Solemn Eucharistic being celebrated by Fr. Maxim D’souza who briefed in Mary as the ark of the covenant. This was followed by the cultural program where in Mr. Michael Quadras, a retired Army Officer was the Chief Guest for the program. In his speech he encouraged the students to join the armed forces and gave directions as to how they could enter the armed forces and what are the benefits they could have apart from serving the country.

Fr. Leo Pereira asked the students to be passionate for their land/country and the best way to do this was to take care of the environment. He cited examples of young girls and boys who have taken steps to save the environment. Various cultural programs were presented by the students depicting the themes such as Patriotic Spirit, diversity and of peace and harmony.

Fr. Maxim thanked and praised the students and the teachers for their effort and hard work in putting such a meaning program. He later asked the students to be responsible in their approach towards studies and to grow as responsible citizens.