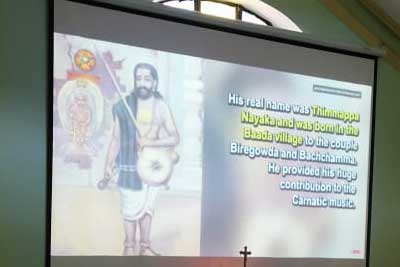 December 3rd is celebrated as the birth anniversary of South Indian poet, Kanakadasa. Apart from being a renowned poet, Kanakadasa was also a philosopher, musician and composer from Karnataka, who was born in 1509 and died in 1609. On occasion of Kanakadasa Jayanthi our Principal, Fr. Maxim D’souza organized a small program with the teachers.

The program started with a prayer followed by lighting of the lamp. Later Miss Sulekha gave a brief introduction on Kanakadasa’s life, the great poet who hailed from Haveri district of the southern state and is known for his devotional songs and Upabhoga, compositions in the Kannada language for Carnatic music. A powerpoint presentation was prepared on the great poet and the same was presented on the screen.

The Program continued with a speech by our Principal, Fr. Maxim D’souza, during which he stressed how we could learn important lessons from the life of Kanakadasa. As he hailed from a lower caste and was discriminated due to this fact, his ardent love for God and his devotion won God’s favour. God never makes differences among his people. God has created us all human beings as equals. It is we human beings who are discriminating among ourselves on the basis of caste, religion, colour and origin. Citing the example from a story, he highlighted that as long as we humans continue to make these distinctions, we continue being in darkness. He urged the teachers to enlighten the students through education to shun these differences and teach them to worship God in spirit and truth.