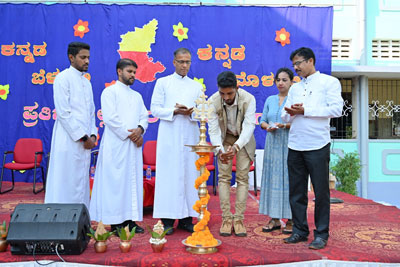 “Kannada is one of the 3 ancient languages and therefore it has a rich reservoir of culture and literature. Students have knowledge but they lack language skills. Language skills are developed by its regular use. Though students are studying in English medium schools, parents should not shy away from speaking to the children in the mother tongue at home. The excellent oratory skills of Don Bosco School students today have proved wrong the assumption that English medium students cannot speak the vernacular language eloquently,” said Mr. Akshay Hegde Molahalli, a National Awardee Kannada Anchor & Speaker. He was speaking as the Chief Guest of a grand program organized by Don Bosco CBSE School Trasi to mark the 67th Statehood Day of Karnataka here recently.

The day long celebrations were ushered in, in the morning with paying respects and honour to the State with its symbolisms of the flag and the image of Karnataka Mathe. Teachers as well as Students took part in singing the praises of the Mother State with songs and delivering speeches. In his address, Fr. Maxim D’Souza said that, “we belong to a big country and are proud of it, we have special love for our state since it is closely linked to our mother tongue. It has given us our future and the people of Karnataka have put the State on the global map with their hard work and dynamism.”

The evening function was coupled with distribution of awards to the students who had excelled in various activities and competitions. The quadrangle of the School was packed to capacity with about 700 people in attendance including students. Mesmerizing cultural performances were put up by the students that helped reminiscing the rich cultural heritage of Karnataka. Present on the occasion were Rev. Fr. Roshan D’Souza, the Administrator, Rev. Fr. Ronald Vaz, the Vice Principal, Parent Representatives Mrs. Anitha Lobo and Mr. Suresh Poojary. Mrs. Pavithra welcomed the gathering and Fr. Maxim D’Souza proposed the vote of thanks. The entire program was coordinated by Trs. Sulekha Shetty and Tr. Sangeeta.